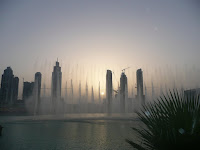 Those dancing fountains in a Dubai dusk


I headed out onto The Palm for lunch yesterday. This man-made island is shaped like a palm tree and, when finished, will feature a massive array of residential property, as well as hotels, shops etc.

I was to meet a client at The Atlantis Hotel, an extraordinarily over-the-top and Disney-ish hallucination of an edifice that contains numerous up-market shops and good restaurants, including Nobu and Locatelli. I had been invited to eat in the Brasserie Rostaing. Walking there from the lobby, I passed a simply vast aquarium that would, I suspect, have outdone those in City Hall in London.

We had a superb meal. I started with Egg "Grand Mere": a soft-boiled egg is a sauce of minced meat and cheese. It sounds crazy-heavy, but was delicious. Main course, I was a little more circumspect and ordered the hammour. Hammour's the local grouper and a beautifully textured fish, as grouper often are. We drank a 2005 Rully Blanc La Chaume from Jacques Dury and it was easy, lightly oaked, ready.

Leaving lunch, we stopped to examine the aquarium in more detail. Big fish - the sort that made me itchy for rod and line - idled past. A square-snouted shark lounged on the bottom. Then, a surprise. A whale shark eased itself past the window. My hosts told me that it had been caught locally and, rather than release it, it was decided to keep it as the crown jewel in their piscatorial menagerie.

I have been reading a few books in my quiet time between appointments and dealing with these '08 Bordeaux wines that are still tumbling out. I picked up a Michael Connelly at Heathrow and it's one of his best. If you're a fan of crime fiction and can handle a gruesome murder or two and quite a bit of other unpleasantness besides, Angel's Flight is a seriously well-plotted page turner.

Also at the airport, for back-up I added Breath by Tim Winton. My goodness, this Aussie can write. His prose sinks the reader into the hazy confusion of adolescence where misunderstood factors shape whole lives. Finishing the last page, one has to blink to bring oneself back to the present time, to throw off this beautifully communciated, poignant and wholly absorbing world that Winton has created. How something seemingly so personally described can be entirely fictional, I have no idea. But I am in awe of his writing.

So I am now onto my third book and a book - at least in part - about wine. I will reveal more in time.

Last night I took a taxi down to the Capital Club in the Dubai International Finance Centre, there to meet a group of lawyers for whom I hosted a semi-impromptu wine tasting; only semi-impromptu, as it had been planned, but wines were only decided after my arrival when I had a chance to digest the wine list.

We drank an Austrian 2004 Riesling from Brundlmeyer in the bar, before descending to a private room downstairs. I called out a German 2004 QBA by Georg Breuer to start, with a perhaps predictably mixed reception. A 2006 Chablis from a brilliant co-operative La Chablisienne followed and, being rather easier to get one's head 'round, was given the thumbs up. A rather nifty Gavi followed: clean, nutty/peary; good weight of lemon fruit. I wish I could recall the producer (just have: Batasiolo).

We followed with some reds: the 2005 Aloxe-Corton of Nicolas Rossignol and the 2005 Chateauneuf of Montredon, both just ready, the former complex, red fruited, beginning to sing from that undergrowth hymnbook, the latter spicy, linear, brambly and controlled. Both were very good.

We finished with a Banyuls of Dr Parce: sweet up front, coming together to a dry, structured finish. This is superb wine and I would have drunk it with steak tartare given half a chance. Delicious it was.

We repaired to the bar, drank more Montredon, ate toothsome, absorbant food, after which I came back to the hotel. The others were going on to a karaoke bar, but as it was 1am I let caution be my watchword. What a wuss.