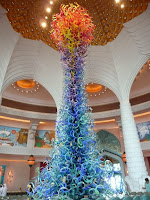 I hosted a wine tasting for the Dubai Caledonian Society the other evening in a large room in the Dusit Thani Hotel. Completing their AGM at 8.45 or so, the combined throng were then ushered next door for nibbles and the staff set about pouring the samples of the wines I had chosen for the event.

In order, we sampled 2008 Sauvignon Blanc Vergelegen, 2007 Riesling Peter Lehman, 2007 Chablis William Fevre, 2007 Pinot Noir Scotchman's Hill, 2005 Rioja, Marques de Caceres (a sub for the Bierzo I had chosen that turned out to be out of stock) and 2006 Negroamaro, Masseria Altemura.

There were some 40 souls gathered and we had a very merry time slooshing (no spitting!) and cogitating, with me providing something of a running commentary. I was very gratified to read the folloing words in a subsequent email to Cally Soc members from the committee: "The wine tasting which followed was highly entertaining and thanks goes to Caspar Bowes of Bowes Wine for his amusing and insightful talk and choices of wine". A success then!

I promised to write more about the book I was reading and have now finished. Paul Torday wrote the amusing best seller Salmon Fishing in the Yemen and is, himself, an avid fisherman living, as he does, in Chipchase Castle on the North Tyne: an extraordinary pile and a beautiful stretch of productive salmon river. I enjoyed the book very much, so when recommended his subsequent novel - The Irresistible Inheritance of Wilberforce - filed it away for a likely purchase.

Having finished the brilliant Breath by Tim Winton, I wandered over to The Dubai Mall and enquired whether there was a bookshop within its expansive walls. Well, of course it had to be the biggest bookshop I have ever seen: a vast hall of a place that I would be quite happy to believe housed every book, both fiction and non, published in the last 40 years. The magazine section itself contains enough editions to feed all the dentists' waiting rooms in the western hemisphere.

And then I saw Wilberforce and remembered the recommendation and grabbed it without further ado.

This is a good book; a slightly disconcerting tale; a book without a hero, as the main protagonist is so thoroughly incomprehensible. Utterly ego-centric, Wilberforce trundles through the tale sucking vampirically on life and others and ultimately being quite drained of his own life force in return.

The novel is effectively written backwards: A Novel in Four Vintages, describing Wilberforce's rise and fall or, rather fall and rise, as the book starts with a wine-addled and terminally ill Wilberforce spunking a large tranche of his remaining fortune on two bottles of 1982 Chateau Petrus in a London restaurant and subsequently having to be picked up from the floor by the management and bundled into a taxi and it continues with tales from earlier years which explain how he comes to be in this sorry condition.

Wine is a central theme in the book, especially claret and Wilberforce drinks his way through a great many fine bottles.

The whole, as I say, is rather disconcerting. but I recommend it. Just be careful with the Phoenix publication. The pages fall out. (N.B. Since penning this post I have been advised on that which should have been obvious to me: book glue tends to soften at tempertures approaching 40 degrees C. Thus the pages falling from my copy of Wilberforce were probably victims of my being in Dubai and being intent on reading out-of-doors. Phoenix, I apologise!)