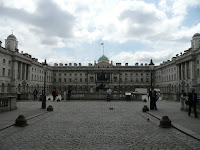 Today's been a little cooler: a relief for chubby, overheated babies and their (only slightly, in some cases) less chubby siblings and parents. The garden has started to take on that baked appearance, looking like it's high summer.

Some weeks ago I attended a barrel sample tasting of the 2007 vintage ports, held in the Portico Rooms at Somerset House. From that tasting - and another hosted more locally - I selected the best liquids for an offer of these wines.

Tasting young port is a tricky business. They slap one about the taste buds with such vigour that a) one has to retire to lick one's wounds and regroup for further assaults and b) one really should taste each wine several times to get one's head around it, as it were.

So I started and tasted. I stopped and ate a biscuit, had a glass of water. Then I tasted again. I had lunch. I tasted again, then paused for a final assault during which I examined further samples of the wines at which I thought my buds would like another gander.

Wow, these are good ports. Tasting them, I did wonder whether the days of black-as-yer-hat, uber-tannic, face damaging young ports are behind us. The '07s are mighty rich, but they have swapped that propensity to incite a certain terror - a propensity frequently to be noted in baby ports of yore - for characteristics more modern and, in my opinion, more sophisticated.

They are, ahem, elegant. They have - wot? - supple fruit. They are fresh and complex. Okay, so you could still fill your Montblanc Meisterstuck with them and write home to your mum, but the paper wouldn't smoke and writhe as you were doing so. And the letter would arrive redolent of the most delightful fruit.

I travelled to a village in Oxfordshire the other day for lunch at the home of a senior wine trade figure who had very kindly extended me an invitation. In his beautiful and ancient farmhouse home I was poured a glass of Clos Cazals - a champagne that's very à la mode and a wine I had heard of but never tried - and we then headed into the garden where a Portuguese wood-fired oven was cooling towards the temperature that suggested it might be in the mood to accept a brace of woodcock.

Like a lump of chalk soaked in lemon juice and then fired at my tongue, the Clos Cazals refreshed me to my core. The woodcock (from a wood fired oven! In May!!) were delicious and we drank 1986 Vieux Château Certan. My host informed me that this vintage has not been drinking for long; that it had spent years shut up like a book. It was perfect: medium weight, plum and cherry fruit reminding me of top burgundy and it waltzed down the aisle hand-in-hand with the birds.

We finished with cheese and a fabulous 6 putt Tokay. What a treat. I felt thoroughly spoiled.

The wine trade is a happy place. Why wouldn't it be so?
Copyright © 2022 Bowes Wine Ltd  |  All Rights Reserved