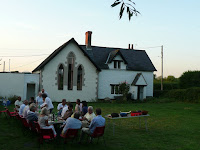 
Yesterday dawned bright, close and very warm. Mid-day found me wandering into the village hall at Hinton Parva from a steamy car park. The building's interior shade and relative cool was very welcome, as was the ice-cold glass of white Rioja that was placed in my hand. A ripe wheel of Brie created its own micro-climate on a table in the corner.

We - a combined mass of wine-related individuals - were present on the invitation of Mark Walford, half of Richards Walford, one of the biggest and finest wine importers in the UK.

Mark is, of course, a wine nut, but also enjoys shooting. Once a year he invites a bevy of like-minded people for a tasting, lunch and barbecue supper. Happily, one of those attending is Silvano Giraldin, who has been at Le Gavroche for over twenty years and who not only wipes pretty much everyone's eye on the clay pigeons being, as he is, something of a Deadeye Dick, he also knocks up a pretty fabulous set of scrumptious meals for the guns.

Having tasted a few wines, sensibly interspersed with an adequate amount of H2O, we drove to the shooting ground: a large field but half a mile away. It was a natural basin for collecting the heat of the day. The sun beat down and we shot and shot.

Split into teams, I started out feeling that I was rather letting the side down. My eye was wayward and scores low. It took about half an hour to turn things around, however, and we ended up winning one of the flushes at the end of the day.

I love this kind of shooting. Four guns in a row are assaulted by a shower of clays, the aim being to install a lead curtain through which nothing passes unscathed.

We retired to the village hall, light headed with the heat, heavy footed with tiredness. "Water or champagne?" was the question when we arrived. Why not both?

A jolly day. Good company, good shooting, good wine and good food. With those ingredients stirred into the fabulous weather, how could one fail to have fun?!