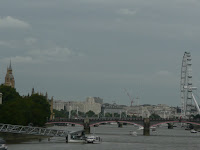 Down river from Vauxhall Bridge

Wednesday morning found me in Pewsey station carpark in light rain. The queue for the ticket office (the machine tasked with dishing out prepaid tickets being, as ever, out of order) was long and lasted just long enough for me to get to the window as the train for Paddington pulled in. Ticketless - albeit clutching my internet booking - I legged it.

Often, the trains from Pewsey to London are relatively quiet. I would guess this is because those heading up to Capital City from the major towns downstream prefer to travel by fast train, not one that stops at places so piddly as the one where I alighted.

First stop, Vauxhall and the UK importer of the Piemontese producer La Spinetta. I arrived early by some miracle for this merchant does not house itself in the easiest of places, access-wise. On the fourth floor of an old Victorian warehouse, I finally opened the right door and was quickly employed opening the tasting bottles and decanting those bottles that needed it.

We offered a La Spinetta wine some months ago - the 2004 Barolo Campé - and it was good to have another look at it. It was one of the best wines on the table. But in addition, there were a couple of superb whites - an oaked Sauvignon Blanc and a high-altitude Chardonnay - as well as the 2006 Barbaresci and a range of new wines from a recently acquired property in Tuscany. All-in-all, a good work out for the senses and I stepped, blinking mole-like, out into the morning sunshine with a spring in my step and tannin sticking tackily to my molars.

I walked to the Horticultural Halls in Victoria. I almost miss London when the weather is this fine, especially if one's journey is on foot and takes one over one of the city's bridges, from where one gets quite the best impression of the place.

Wines of Chile tasting was the usual monster, the hall full of English merchants tasting and chatting and Chilean producers and representatives gabbling away in rapid-fire Spanish. The prettiest girls, dressed to the nines, pour the wines. One finds oneself tempted by dark eyes and dark liquids as one walks the rows of tables.

My mission at Wines of Chile was to find some unusual mono-varietal wines for The Daily Drinker and keep an eye open for top-notch stuff with the capacity to age. Thus I left with excellent examples of Carmenère - Chile adopted red grape - and Sauvignon Gris under my belt (so to speak), plus a couple of serious and interesting reds for long storage that may well appear on one or other Backfill & Diversify offer going forward.

I cut and ran. I had done enough and wanted to be home in time to see the children before bedtime. Thank goodness my teeth returned to their natural colour by the time I stepped through our front door. The purplish grey they presented at the time of my departure from the Horticultural Halls might have unduly frightened Isabella and given her nightmares.