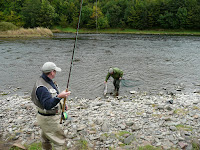 The ghillie tails a hen salmon


Going to Scotland for a single day's fishing in the expectation of grassing a salmon is optimistic to say the least, so it was in anticipation of a good meal and some fine wines, as well as a session of casting practice on the River Tweed that I set out for London, there to meet a friend, dump my car and catch a north-bound train from King's Cross station.

My bags weighed heavy. Waders, two rods and associated reels, flies, line, as well as 5 bottles of wine, one for the journey (I am starting to think travel by train a rather good idea) and four for the evening meal on arrival all tugged like Jupiter's gravity at my shoulders.

The taxi driver tasked with transporting us to King's X appeared unfamiliar with the streets of London, thus we had to hussle through the concourse on arrival, something I find stressful at the best of times, let alone with what felt like 200lbs of gear.

We made it with a minute or so to spare and the train was soon clickety-clacking towards its final destination: Edinburgh.

More taxi tiresomeness was to follow in Berwick. The car at the front of the taxi queue had seen better days, as had the driver. I am uncertain which one was closest the scrap merchant, but we bumped and scraped our way to Luke's house where we were to spend the night, the car grounding out on every pothole, the driver, watery eyed and with shaking hands, wheezing his way through fag after fag.

We dined well, pigeon starter preceding grouse main, both cooked to a T.

2003 Château La Tour Carnet is dense, a touch chocolaty, its tannins fractionally coarse. It is delicious. If you have '03s in your cellar, I would recommend trying a bottle (unless they are very senior châteaux).

1999 Pommard 1er Cru Les Rugiens from the cellar of Aleth Le Royer-Girardin has softened beautifully, the fruit a beautiful amalgam of red and blue berries; most satisfying.

1999 Black Guts Shiraz, a Barossa made by Rusden is like a smoky pastille. I will leave the rest for another few years, as I found it rather soupy, a bit Woolies pick 'n' mix.

2002 Juveniles, Torbreck was more impressive than the Rusden on the night, giving up a meaty complexity. Very good, even after a palate coating from the Rusden.

Lastly, a wine I'd never even heard of, let alone tasted, the 2002 Barossa Family Reserve Merlot from an outfit called Rohrlach. I cannot remember tasting a Barossa Merlot before and, typically for Barossa red wines, it was inkily coloured and dense of fruit; perhaps not discernably Merlot, but a very good drop nevertheless.

You will understand that the rising, breakfasting and travel to the river was conducted quietly, the slipping of wadered legs into the cooling waters of the Tweed most welcome. And the rasp of my reel - within 20 minutes of starting - as a salmon turned away with my fly in its mouth had the positive result of making me forget my aching eye sockets altogether.

The fish jumped and pulled, boiled nervously on the surface and generally ran about the river before tiring, enabling me to tail it out onto the grass. My first salmon of '09! Joy was not the least bridled, I must say. The fish has come home with me and now resides in my freezer: 5.75lbs of fresh cock salmon.

We popped to the pub for lunch before continuing our efforts in the teeth of a gale. At the 11th hour, a taxi's arrival to remove us back to Berwick station but 40 minutes away and with a 20 minute walk back to my bags, another rasp, another fish.

This one, a hen, sped about the shallow run. The ghillie having entered the water, net at the ready, appeared at one point to be conducting a tarantella with the creature and it hurtled near and he shuffled around to prevent it knitting my line around his legs.

The fish was grassed and unhooked and I prepared to return her to the water. Alas, she was bleeding quite heavily. They do not survive, fish in this state. My priest - a handy stone taken from the banks of the River Tay some years ago - delivered the last rights, but there was no joy in carrying her back.

Altogether, we had 5 fish between us that day, with a couple of others on and off and assorted other pulls, tweaks, plucks and bangs.

Train and car and I arrive home at 00h50 and sleep the sleep of the highly satisfied.
Copyright © 2022 Bowes Wine Ltd  |  All Rights Reserved