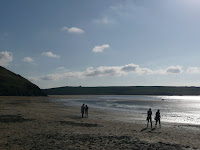 Daymer Bay, looking up the estuary towards Padstow

The road to Cornwall from north Wiltshire is paved with many things, not least some pretty ropy old tarmac. But it is also hemmed in by what seems to be dozens of National Trust properties and, being members of that venerable organisation, we decided to make use of the free entry membership bestows upon one to stop to exercise a pair of children who, by mid-journey, had slept, woken, examined the interior of the car for anything interesting and then set off on quite negative emotional journeys of their own.

Our chosen stop was Castle Drogo. Built by Edward Lutyens for a chap called Julius Drewe in the early part of the 20th century, Castle Drogo is essentially a modern interpretation of a medieval theme. A solid construction of granite blocks it certainly looks the part, as does the interior, with its vaulted ceilings and granite corridors. Yet there's nothing cold here, for the place was built with all modern conveniences. I like it. It manages to be impressive but homely at one and the same time. Joseph, always one room or turn of the garden hedge ahead, found quite the requisite sum of exercise for the onward step to Trebetherick.

Our hosts' house sits right on Daymer Bay and what a place for children. Miles of beach and an intricate network of thousands of rock pools containing life of all kinds, there was never a dull moment.

We drank a couple of bottles of 1989 Cos d'Estournel our first evening. With a leg of lamb. It was fun. Here's the (brief) note: Very deeply coloured and giving up a biscuit/cedar nose, along with red and black currants and a hint of almost Cab Franc-like spice, although I believe that there was none in the blend. The palate is full of fine, firm tannin; the fruit has softened, but there's real intent in the grip and high mineral expression. Blackcurrants and plums. I find really decent freshness for an '89. Quite a solid mouthful and a fully mature wine. No hurry though.

We took the pedestrian ferry across from Rock to Padstow, where we lunched in Rick Stein's fish 'n' chips establishment (sea bream, chips, mushy peas; tartare sauce 75p; 6/10). We bought the kids icecreams on the sea front afterwards and wandered slowly back to the ferry. We crabbed in the rock pools and dabbled in the sea, had cooked breakfasts and long dinners with lots of wine.

The stop on the journey back was the NT garden of Tintinhull, a bijou gem close to the A30. Exercise and on and home. A fine weekend in a lovely place.

I believe the Cornish residents get stranger the further west one goes, which is why, I suppose, the county's compared to a Christmas stocking...
Copyright © 2022 Bowes Wine Ltd  |  All Rights Reserved