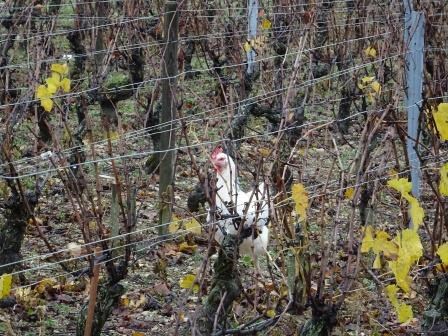 Just back from a few days of tasting in Burgundy and I have a moment to reflect on what I’ve discovered.

A Few Days in Burgundy

I jetted down to Lyon on Sunday afternoon with a tasting buddy along for moral support. And from Lyon it’s an easy hour-and-a-half blast up the péage to Beaune and our digs at my perennial Burgundy haunt, the Mercure Hotel: not the town’s most salubrious establishment, but walking distance to pretty much any Beaune restaurant one might be interested in patronising.

And patronise one of them we almost immediately did, having booked a table at one of the few to open its doors on a Sunday evening. Les Popiettes is well worth seeking out if one finds oneself caught nutritionally short in the town. Food is really very good and the wine list likewise…well, I say “likewise”, but the wine list at Popiettes suffers the same complaints as do pretty much all Beaune restos i.e. there’s very little mature stuff to be found. And speaking to other visiting English wine merchants it seemed that Beaujolais was the most popular bottle at their dinner tables. It’s a more pleasurable wine to drink young than many a Côte d’Or red and tickets are generally rather lighter.

Monday in the Côte Chalonnaise and Chablis

In terms of tastings, Monday was a geographically diverse day of work, with visits spanning the Côte Chalonnaise and Chablis, taking in a new estate but two vintages young and a Chablis producer whose wines we’ve offered severally in the past. Why? Because we just love the stuff he bottles.

After the long drive back to Beaune, we headed out to Caves Madeleine, a longstanding favourite of the wine-obsessed. Busy and informal, most of this restaurant is taken up by a long trestle table and benches that are shared by eager punters. I am happy to say we had a table to ourselves and our evening was marred only by one diner – a young man – repeatedly leaving the restaurant for an en plein air cigarette and not bothering to shut the door either on his way out or in, a sin he only managed to supersede towards the end of our meal by puffing heavily on an e-cigarette at the table.

Tuesday in the Côte de Beaune then Côte de Nuits

Tuesday was spent at addresses in both the Côte de Beaune and Côte de Nuits, with some very senior wines being sampled. Michel Lafarge, Odoul-Coquard, Jean Pascal and Bachelet-Monnot, with a break in the middle for lunch with Mark Haisma in his winery located over the railway line from Vougeot. Mark’s an expat Aussie who arrived in Burgundy in 2009, having previously been wine maker at Yarra Yering for some years.

Over a tasting of Mark’s ‘17s and a delicious lunch of sausage and lentils, Mark gave us the low-down on recent happenings in the region, including the 2018 vintage. 2018’s going to be an interesting one to assess. It was stiflingly hot in the growing season, as well as inflicting drought upon the vineyards. As someone who has worked in the hotter wine producing regions of the world, Mark is ideally placed to cope with such conditions. Some Burgundians, with only really 2003 as precedent, might be lacking the experience to make the best of these tricky meteorological extremes.

Tuesday’s dinner was taken at the tiny La Lune restaurant, a purveyor of sublime Japanese-French fusion food. There are 17 covers and two staff members: the owner, who cooks flat-out for the entire session and a waiter who does everything else. Crikey the food’s good here. One orders bits and bobs, plates small and large, a spread of griddled Japanese mushrooms here, a rewarding pile of battered chicken balls there, all brilliantly conceived. Superfluous or not, a nightcap ensued at Pickwick’s, Beaune’s English pub. It was utterly deserted, so nightcap having been sunk, we floated back to our hotel.

Wednesday in the Côte de Nuits then Côte de Beaune

Wednesday was a matter of a dash to Lamarche in Vosne, then back down to the Côte de Beaune for visits to Rollin in Pernand-Vergelesses and finishing at Camus-Bruchon in Savigny. There followed an hour-and-a-half drive back to Lyon airport and the flight home. So, a compact but informative trip all ‘round.

You may be eager to hear about 2017 as a vintage and what sort of wines it has produced. Well, I have to report that the tastings were blissfully easy this year.  The wines are utter charmers. Throughout my short visit I found myself sampling wines that were bright with the most delightfully pure and charming fruit and that fruit backed by a precise mineral expression that spoke volumes about the origin of each wine.

Many of these wines will drink relatively young, but in my opinion they will also age very well indeed. Volumes are reasonable; vignerons are happy.

I will be securing allocations in the coming weeks and an offering will appear sometime in the New Year. I am looking forward to further tastings of the vintage in London in due course, but I am going to be recommending that anyone with an interest in burgundy sharpens their pencils now. Good times are a-coming!